Morphyre is a brand new Visualizations System made by Gordon Williams and a couple of other visuals enthusiasts. Morphyre's fusion of imaginative visuals and sound enhances and transforms the experience of listening to music on individual computers and, as Morphyre Pro, at nightclubs and gigs. 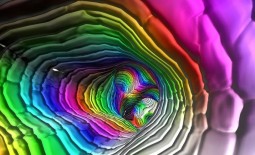 Every Morphyre scene moves in time with your music, assessing both tempo and volume. The majority of scenes integrate an animated 3D form with a flowing patterned or reiterative background through the use of shadows and warping effects. Other scenes include tunnels, fractals, animated blocks and sketches. Every single background/foreground combination has been carefully selected for its aesthetic effect. Click Here to check out our Demo video.

Morphyre is available for individual use on personal computers, on iTunes, Windows Media Player and Winamp, in both a free and an extended personal version. It can also be bought, as Morphyre Pro, for professional use at Nightclubs, gigs or any public venue.

When you download Morphyre Free or Morphyre Personal any improvements, for example, new scenes, shapes, backgrounds or effects, will immediately update themselves on your version whenever you go online while Morphyre is running.

Morphyre specialises in 3D which means that most of the scenes involve a moving, morphing 3-Dimensional form (or forms). These shapes are created by the use of mathematical formulae and 3D modelling and we are adding new ones all the time. Morphyre even gives you the opportunity to create your own 3D scene! Morphyre's 3D expertise also means that Morphyre Pro contains the ability to be fully 3D when played at venues which can provide red and blue or polarised glasses.

As a student in 2001 Gordon created R2 visuals which were followed in 2004 by R4, a hugely successful system which has been downloaded by more than 1.4 million people and used in music venues across the world, including a Ministry of Sound New Year's event at the O2 Dome in London. Click Here to visit the R4 website. Gordon worked on Morphyre for 3 years before releasing it in September 2009 and continues to update it to ensure that it is as good as it can be.

We hope you enjoy using Morphyre as much as we've enjoyed making it!