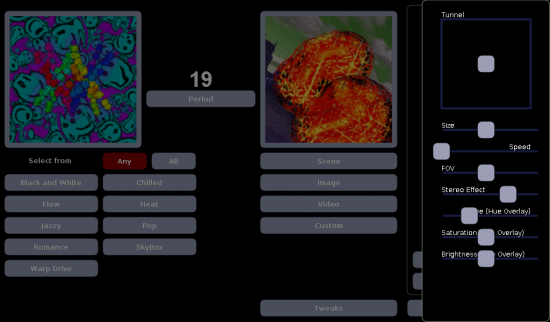 This is a scrollable area containing Scroll bars and Boxes that allow you to dynamically change aspects of the currently displaying scenes.

Tapping in the dimmed area to the left will cancel the menu.

Size - The size of Objects in scenes contraining Objects

Speed - The Speed of movement through a scene - when red, this overrides the speed that was determined from the currently playing music.

Stereo Effect - when a 'Stereo' 3D Overlay is applied, changing this slider changes the Stereo Separation. This is often useful to ensure that there is a believeable 3D effect which does not give the viewers headaches.

Hue/Saturation/Brightness -  When the 'Hue' Overlay is applied ('Hue Flicker' overlays too - however for these the Hue tweak will not work) these change the Hue, Saturation and Brightness of the visuals.