Morphyre's Touch Screen is a 'Resistive' screen, which differs from screens like the iPhone in that you have to press harder. If you release pressure while dragging, the touchscreen may interpret this as you lifting off, or even a short tap. You may find it easier to press with a blunt object such as the end of your fingernail, or the Stylus that is hidden in the right-hand side of the 10" touchscreen - be careful not to scratch the screen.

Buttons will highlight when you press them. If you realise you did not intend to press the button, drag your finger away from the button while still pressing, and then release.

Some scroll bars and boxes may stay highlighted after you have moved them (as is the case for Tweaks). This means that they are 'active'. In order to deactivate them you just need to tap on the slider.

Lists of items in Morphyre are often scrollable as the whole list may not fit on the screen. To move them just press and drag. Note that the list has inertia so that if you release while still moving your finger the list will continue to scroll for a while.

When a menu appears, everything behind it will become dimmed. Tapping on the dimmed area will cancel the menu. 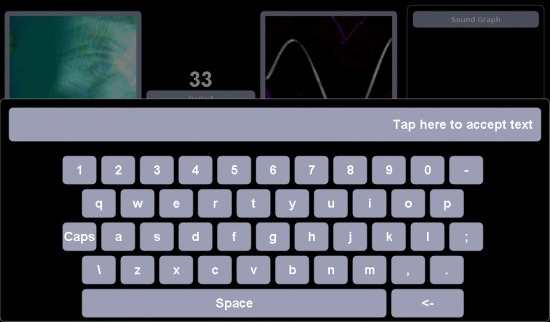 To cancel the keyboard tap on the dimmed area behind it (as for other menus). To accept the text you have written, tap on the text itself.